Are you spending enough on home maintenance? It’s tricky to know just how much we should be spending on our homes, to boost the value and to avoid them dwindling into disrepair.

With more Brits turning to the professionals, rather than DIY, it can become a costly affair.

That’s why Drench has decided to average the cost of each local tradesmen across the UK, to find out just how much you can expect to be charged on home maintenance in your city. 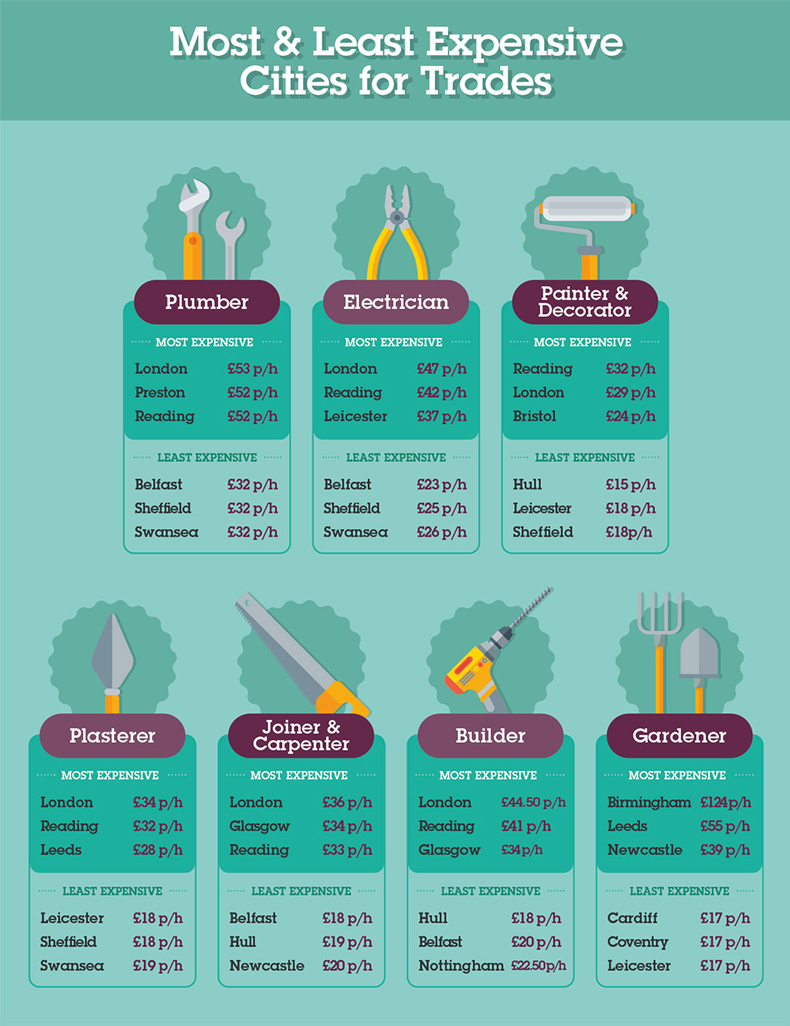 Birmingham, London and Reading are the Most Expensive Cities for Home Maintenance

We analysed the hourly wage of trades in 20 cities to discover how much each city pays on average for home maintenance. Although usually trades in Birmingham aren’t the priciest - work from a gardener will set you back the most, at £124 per hour. This makes the city the most expensive for home maintenance, with an hours work from each trade costing £288.

Surprisingly, this means London hasn’t taken first place for being the most expensive city. However, it doesn’t fall short. The capital racks up an average of £281.50 in tradespeople costs.

Just slightly cheaper than Birmingham and London is Reading, with home maintenance and repairs costing £258.

Belfast is the Cheapest City for Homeowner Costs

Not only are house prices in Northern Ireland 40% cheaper than the rest of the UK, but homeowners in Belfast pay the least for maintenance and repairs. An hours work from each trade will cost just £152 in the Northern Irish capital; 61% cheaper than Birmingham. Amazingly, you can employ a Carpenter & Joiner for as little as £18 per hour, as well as hiring the least expensive Electrician in the UK – costing £23 per hour.

Taking second place for the cheapest city in tradespeople costs is Sheffield. Those living in this city pay £167 - half of what Birmingham, London and Reading pay for house upkeep.

The Welsh city, Swansea, is the third least expensive city for maintaining a home, totalling £168 for each trade to do an hour’s work. Although, Swansea is only a 60 min drive from Cardiff, tradespeople cost nearly 10% less than their Welsh counterparts.

Running into a plumbing issue can be a homeowner’s nightmare in costs and damage. Especially considering across the UK, on average, a Plumber is the costliest trade at £39 per hour; 89% more than the average Brit’s hourly earnings.

Despite a plumbing job being pricey, there are cities where you can find a cheap Plumber. Swansea, Sheffield and Belfast are the least expensive towns to have a plumbing problem, costing £32 an hour for a Plumber - £20 cheaper than London, Preston and Reading.

The Electrician Costs that Will Shock You

Depending on how old your home is or how long you’ve lived in your house, your electrical system may be due some upgrading. It’s recommended that homeowners should get their electrical structure tested every 10 years to check for deterioration and faults. For landlords, this is even more frequent; every 5 years.

However, this is probably something you won’t want to DIY with electrical tasks not exactly being the simplest, or safest. So, when it’s time to call in a professional, how does your city fare in electrician costs?

If you live in the Northern Irish capital, Belfast, an Electrician will set you back the least, with an average £23 hourly rate. This is £6 cheaper than the national average.

However, if you’re needing electrical work in London, you could be looking at paying the most in the UK at nearly £50 (£47) an hour, or £210 a day, which is enough to heat the average home for 2 months.

37 miles out of London, you’ll find Reading and the second most expensive place to hire an Electrician for homeowners, costing £42 per hour.

Unexpected home repairs can be a shock to you and your finances. In order for Brits to be a bit more prepared, we decided to ask trade professionals across the UK the most common household jobs they undertake and the likely time taken. This allowed us to work out the average cost across the UK.

The Most Common Repairs in British Homes

So, what can you expect to go wrong in your house? Plumbers cited that they have two common household jobs, this includes tap & toilet cistern fixes, as well as repairing the boiler. Which could mean UK homeowners could be forking out £215 for the plumber.

However, in cities where plumbers are the most expensive, such as London, Preston and Reading, homeowners in these cities could be paying 23% more than the rest of the UK, with the average plumbing repairs costing £265 here.

Surprisingly, if you’re looking to renovate your home you might be paying more for a new kitchen than for a garage to be converted. According to Drench’s research, the most popular job carpenter & joiners undertake is fitting a new kitchen. This task could take two weeks, meaning on average homeowners could pay £2,358 in labour costs.

Yet, the most popular building renovation, a garage conversion, takes just one week to complete. So, homeowners are looking to pay £1,385 in labour prices.

Across the UK, on average, a homeowner will pay the most for a plumber call out, but are plumbers reaping the same rewards for their wage? According to Drench’s research, these are the top three earnings for trade professionals:

How to Maintain Your Home: The Homeowner’s Checklist

Your house is your home, and probably one of your biggest investments. Seemingly, you’ll probably want to take the best care of your home to keep the house afloat and make it desirable to buyers when the time comes to sell. So, to help take care of your property, we’ve devised a seasonal home maintenance checklist:

Although there are seasonal checklists, there are things you can do every month, such as:

Doing these tasks every season or monthly where required, will prevent you running into any unexpected costs down the line from calling in professionals. Although, not everything can be done yourself and sometimes it’s best to call in a tradesperson.