A dripping tap is something many of us will simply put up with, even if it's becoming increasingly irritating. The noise of the water hitting your kitchen sink and the water wastage is a common occurrence in our homes, but it doesn't need to be this way. The problem of a dripping tap can often be solved easily by replacing the tap washer.

What Is A Tap Washer?

Tap washers are located inside your tap. They are designed to form a watertight seal when you turn off the tap by preventing water flow. However, over time they can become less effective and can't create this seal. This will allow water to flow out of the spout causing the tap to drip.

In this article, we'll show you how you can easily remove and replace a worn tap washer to get your tap working at its best. If you have a more modern tap, it may have a ceramic disk rather than a rubber washer.

How To Change A Tap Washer:

Step 1: Turn Off The Water

Before trying to remove the tap washer, it's a good idea to block up your plug hole with an old towel or cloth. You're going to be working with some small tap components so you want to make sure if you drop them, they don't go straight down the plug hole. You can also spread a towel around your sink if you're concerned about damaging it .

First, remove the tap head cover which can usually be popped up using a flat head screwdriver. You'll then see a small screw that you need to remove. You should now be able to lift up the tap head to remove it.

Once you've removed the tap head, you should be able to see the tap valve which you can remove using a spanner. If it's particularly stiff, use a second wrench to hold the tap in place as you loosen the valve. 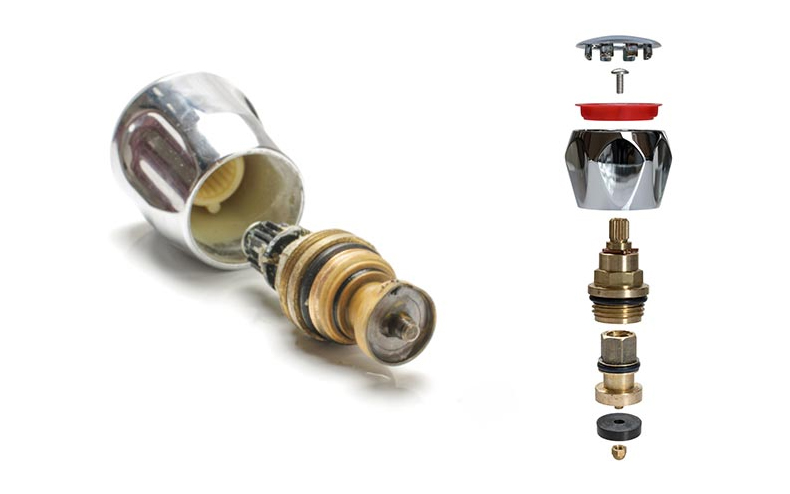 Once you've removed the valve you should be able to see the tap washer. This will usually be held in place using a small screw or nut that you can remove with a spanner or screwdriver. Sometimes, especially in older taps, the washers can be very difficult to remove. If this is the case, apply some penetrating oil and allow it to soak in before trying again.

Now you've removed the old tap washer, you can replace it with one the same size. You can then follow the previous steps in reverse to put your tap back together.

If everything worked, you should now have a functioning tap that doesn't drip.

Why Does My Tap Still Drip After Changing The Washer?

If you've replaced the washer and your tap is still dripping, you may need to reseat the tap. The valve seat on your tap is what the washer closes against to stop water flow. Over time the seat can become damaged and will allow water to pass through, causing the tap to drip.

Reseating the tap involves smoothing off the metal plate of the valve seat to improve the seal. To reseat your tap you'll need to buy a special kit but unless you're experienced with DIY, this isn't something we'd recommend doing yourself.

If you've tried all of the above with no success, it may be time to replace your tap. At Drench we have an excellent selection of bathroom taps available, from a range of top luxury brands.