You should not have to put up with the drip-dripping sound of leaky taps. Nowadays, the vast majority of modern bathroom taps use ceramic disc cartridges instead of rubber washers. In simple terms, this means no (or at least far fewer) leaks, and only a 90-degree rotation to turn the tap on or off.

Back in days of old, taps and shower fittings always used rubber washers to prevent dripping. Its a pretty simple method, and works quite well until the washer inevitably begins to wear out and along comes the dripping.

We have all been there at some stage, attempting to succeed at squeezing one final turn out of that pesky tap that refuses to surrender.

Ceramic disc technology is the answer to these problems. With a ceramic disc tap or shower, all that is needed to turn a tap off is a quarter turn and the water flow will stop straight away. On top of that, ceramic discs do not wear out like conventional rubber washers and will just keep on going 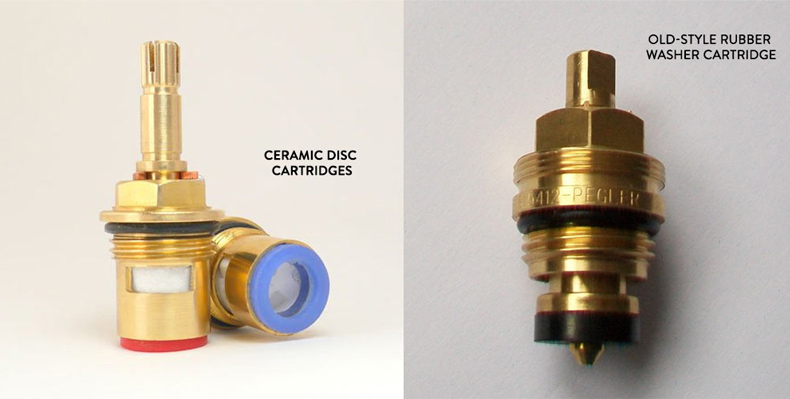 Ceramic disc cartridges are made with two ceramic discs, each with two holes for mixer taps or one hole for a pillar or two handle tap. One disc is fixed in place whilst the other moves with the tap handle. When both discs are in alignment, the water is allowed to flow through the tap and when they are no longer aligned, the water stops.

Even ceramic disc cartridges won't last forever. For peace-of-mind, buy taps from a reputable manufacturer so you can easily source a replacement cartridge in the future. It might cost you a little more in the short-term, but you'll kick yourself if you end up having to buy and install a brand new tap 3 years down the line.

Here at Drench, we have a fantastic range of ceramic disc taps at discounted prices. All modern taps, and some traditional taps will have ceramic disc cartridges. Shop taps here.