The bathroom is one of the most intimate places where you can truly be yourself. How you act in this room with your partner can be a testament of trust and ultimately a solid relationship.

That’s exactly why Drench has decided to quiz the British public to find out when we reach our relationship milestones - in the bathroom.

56% of Couples Put Themselves at Risk of Contracting E.Coli

So, you’ve fallen head over heels with your significant other. You want to spend every day and every minute with them. Going as far as sharing everything with them, like gossip, food, and even their used towels.

More than half (56%) of couples said they’ve shared a used towel with their partner. But, it’s probably the last thing you want to share with your significant other, as research has found that 90% of bathroom towels are contaminated with faecal bacteria and 14% of them carry E. Coli.

Some people are able to carry infectious bacteria on their skin without getting sick, however when we share towels it can pass things like E.Coli, staph infections, and ringworm to others and make them ill.

Next time you want to share something with your partner, perhaps just stick to feelings and affections. 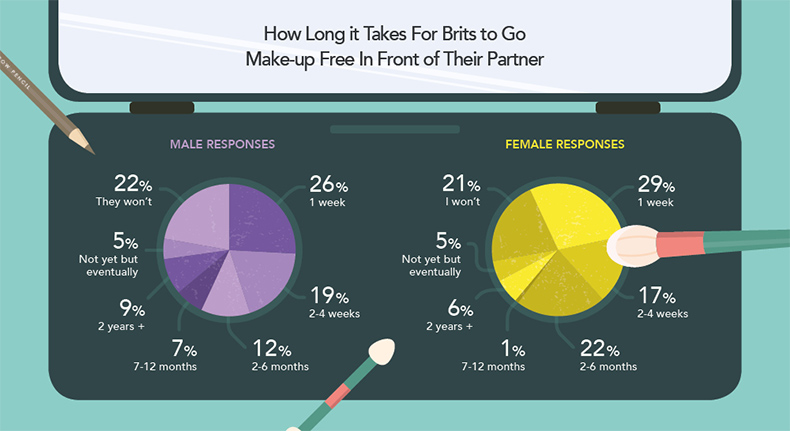 For some women, there’s more concerning things than sharing a towel with their partner, such as having the confidence to remove make-up in front of their significant other.

Sadly, 21% of women said they would never remove make-up in front of their partner even going so far as to sleep in the cosmetics.

However, it appears men just love you the way you are, as only 57% of men noticed that their partner removed make-up in the first 6 months, whereas actually 68% of women took off make-up in this period.

So, ladies take the leap of faith and remove that make-up! If for whatever reason he doesn’t love you the way you are, then he just doesn’t deserve you.

Everyone poops, you know it, we know it, the whole world knows it. Yet, for some reason there’s a strange fantasy that women don’t poo at all, or if they do, they poop glitter and sparkles. It seems women are willing to keep up this myth for as long as it takes - only feeling content around toilet issues in front of their partner after 7 months of dating. The same cannot be said for men however - 32% of men felt happy about toilet concerns with their partner within the first month!

Shockingly, 22% of women said they would always feel uncomfortable about toilet issues around their partner.

While studies have found generally men are more confident than women, with men overestimating and women underestimating their abilities, it appears this confidence gap between men and women occurs in the bathroom too. Within the first month of dating their partner:

For women, however, it takes a lot longer than one month for them to feel confident around even the most basic bathroom matters. Although feeling comfortable around bathroom habits with your partner probably isn’t on the top of your priorities, it’s still important for women to feel confident with themselves and around their partner.

63% of Couples Use The Toilet With The Door Open

Who said romance is dead? A whopping 3 in 5 couples leave the door open while they’re in the bathroom - leaving everything for their significant other to see. Surprisingly, 1 in 5 of those couples do it within the first month. Well if you’re going to do it at some point you may as well test the waters early? 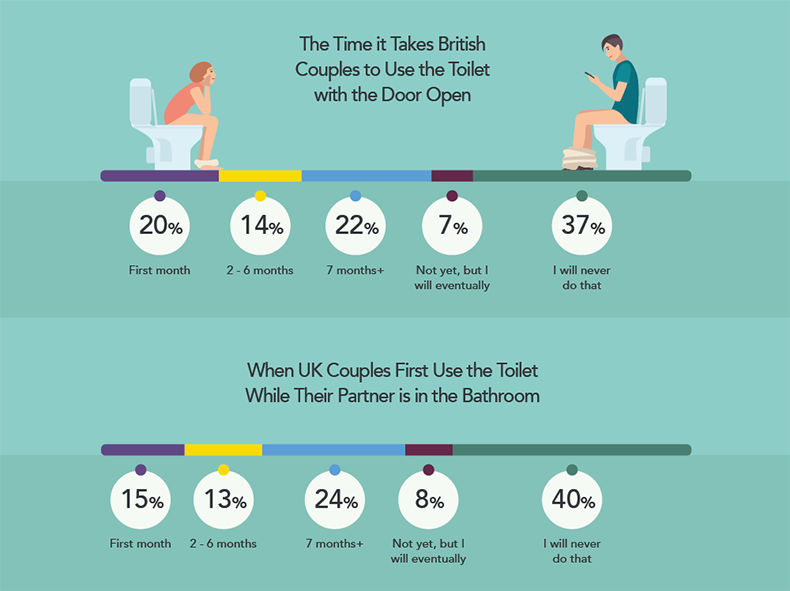 If you really want to test the relationship you could always use the toilet while they were in the bathroom, like 60% of couples in our survey.

Almost a quarter of couples said they waited more than 7 months to finally go to the toilet while their partner was in there, suggesting this act is a step too far for the early stages and needs a greater amount of closeness.

Evidently, for 40% of partnerships the bathroom is a room that should not be shared. No matter how much they love or feel comfortable around their significant other, they would never use the toilet while their partner was in the bathroom.

Revealed: What Bothers Couples The Most in The Bathroom 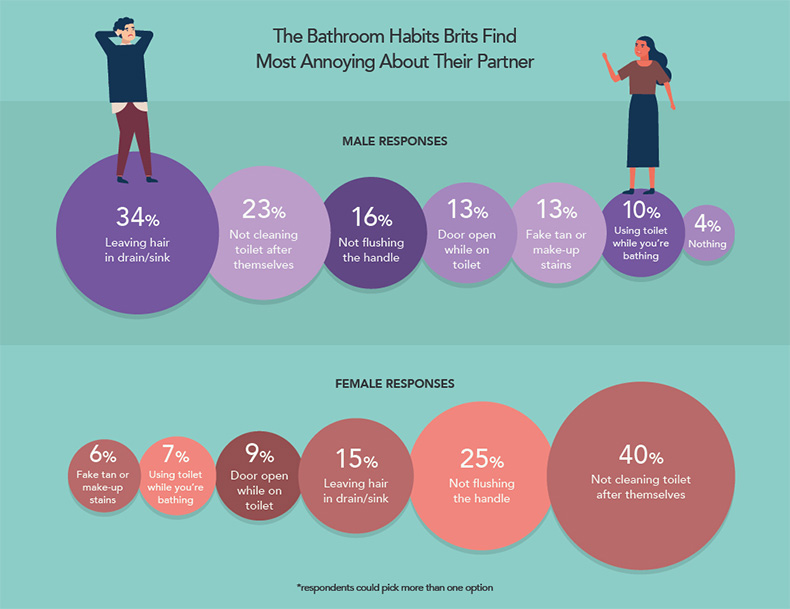 Men and women all have their fair share of annoying traits in the bathroom. For men it seems the most annoying thing you can do in the bathroom is not clean the toilet after you’ve finished. With 40% of women saying it was the most annoying habit of their partner. Women, it appears your hair is causing all the arguments - 34% of men said their partner’s hair in the drain peeved them off the most.

So, what’s the secret to a long and happy relationship? We gathered data from couples who’ve been together for 5 years or longer to discover the recipe for a long-lasting relationship.

Now you have it, if you want to be with your loved one for a long time now you know what to do. If your relationship doesn’t exactly match these stages, don’t fret. Every relationship is truly different, and as long as you have trust, happiness and love, what else could you ask for?