When it comes to designing a bathroom to be proud of, you might be thinking of the stand-out bath, the bold and bright feature wall, or the row of beautiful wicker baskets to store your all your bathroom bits and bobs. Unsurprisingly, the type of taps you choose probably won’t even cross your mind until right at the very end.

Not quite. Whilst we probably get more enjoyment out of tap shopping than most people, knowing your deck-mounted taps from your bath shower mixers will put you in good stead when it comes to creating the bathroom of your dreams.

And frankly nothing says, ‘I know what I’m doing’ more than a wall mounted basin or bath tap.

Wall mounted taps create a beautifully understated focal point, look effortlessly classy and make cleaning around your basin or bath a hell of a lot easier! They can be purchased in various designs, looking fantastic in a fuss-free and sophisticated minimalist bathroom or adding some extra va-va-voom to something more traditional.

No idea where to begin? Here’s our guide to the best wall mounted taps, and how to know which one to go for. 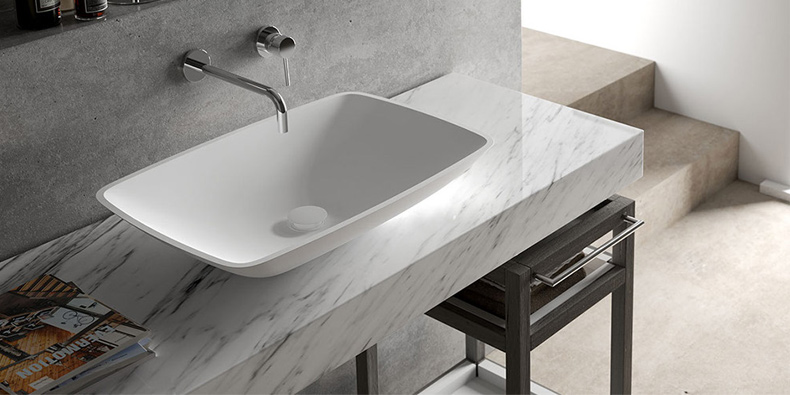 Whether you opt for a crosshead or lever handle tap really depends on your style preference. While lever handles are usually minimalist, modern and make controlling the temperature slightly easier, they don’t pack as much of a punch visually as a traditional crosshead tap might. Both lever and crosshead handles can be purchased to suit either modern or more vintage styled bathrooms, so there really is no bad choice!

Wall mounted bath spouts are undeniably luxurious, especially if you go for a wide spout which will create that cascading waterfall look. Elegant, minimalist and stylish, bath spouts are a great space saver, clearing up room around your bath for any toiletries that make your experience extra extravagant! 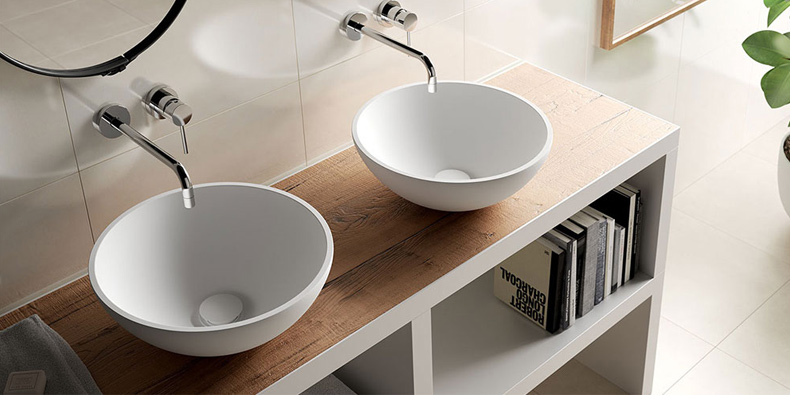 Modern wall mounted taps work as a wonderful focal point in a minimalist bathroom - drawing the eye and leaving a lasting impression on visitors. Contemporary designs generally have clean lines, are made from solid brass and chrome plated and are reminiscent of something you might find in a boutique hotel. Modern wall mounted taps pair beautifully with understated furniture or neutral tones around the room.

Traditional wall mounted taps on the other hand can be a little more extravagant. As opposed to the modern, minimalist feel that many bathroom designers for are opting for right now, traditional bathrooms are luxurious, bold and totally timeless. Traditional wall mounted taps will be a little more stand out, perhaps in an antique finish, although their mounting to the wall adds a contemporary feel you don’t often see in vintage bathrooms.

Ready to take the plunge? Here’s our top wall mounted basin taps to help make your bathroom the talk of the town.

Starting off with a bang, let us introduce the Vellamo Maya Waterfall Wall Mounted Basin Tap. Stylish, modern and ergonomic, this Vellamo model is made of solid brass. The chrome plated finish ensures it suits all styles of minimalist bathrooms and it comes with a 10-year manufacturer guarantee. What really makes this tap special is the waterfall spout – effortlessly adding a touch of luxury to your bathroom.

The Crosswater Wisp Mixer is another wall mounted basin tap that ticks all the boxes in terms of design, practicality and price. Elegant and bang-on-trend, you can’t deny this wall mounted tap has character. The bold shapes and lovely chrome finish make it a stylish addition to any bathroom, while the advanced ceramic disc technology ensures the lever control is smooth and the tap won’t drip over time. Made from solid brass, this tap is strong, sophisticated and durable.

Modern and eye catching, this Crosswater MPRO model is another great choice of wall mounted basin tap - complete with ceramic disc technology to prevent leaks. Designed to complement a modern bathroom, this tap comes in two stunning finishes - polished chrome plated, or a distinctive brushed stainless steel. Both suit contemporary bathrooms to a tee, although the stainless-steel finish makes for more of a statement - especially when paired with the same wall mounted bath tap model.

If your bathroom is more traditional and you want a wall mounted tap to match, you can’t go wrong with this Arcade Nickel wall mounted mixer tap. Despite the timeless and vintage feel, this basin tap works just as seamlessly as its modern counterparts.

It has two controls which feed into the beautifully designed spout, allowing you to easily reach the perfect temperature. The nickel-plated finish adds a chic twist, while the design remains classic, making this tap a standout bathroom fixture. Ceramic disc technology ensures ease of use, and this tap is suitable for both high and low pressure systems.

If you’re after something stand out but don’t have the budget for the others on the list, let us introduce the Vellamo Twist Matt Black Basin Mixer Tap, which comes in a beautiful matt black finish reminiscent of luxurious spas or boutique hotels. This tap boasts some seriously luxurious features such as an aerator and ceramic disc technology to prevent dripping and prolong life, as well as a pretty comforting 10 year manufacturer’s guarantee.

While wall mounted basin taps look great on their own, pairing them with a wall mounted bath tap in a similar design adds a little extra something to the room. Here are our top picks.

If you’re after something with a little more character, this Vellamo Desire wall mounted bath shower mixer is a great choice. The three in one of wall mounted taps, this Vellamo model includes a shower handset, hose and holder, as well as Ceramic disc technology to prevent dripping. Yes, it’s a little more practical and perhaps a little less of a style statement than others on this list, but the space saving design paired with the chrome plated finish ensures it looks at home in any style bathroom. It’s a great budget option, and it comes with a lifetime manufacturer’s guarantee.

Back to something more traditional now for those of you after something vintage, and we’ve got the Crosswater Belgravia Lever Wall Mounted Bath Spout. With a wide opening, the water can flow freely creating that waterfall feeling, while the ceramic disc technology means once it’s off, it’s off. While this tap looks great with just about everything, pairing it with a roll top bath will help achieve that lovely vintage look.

Available in two finishes, chrome or nickel, the Crosswater Belgravia is suitable for low, medium or high pressure systems. The 15-year manufacturer guarantee ensures peace of mind while you soak and it pairs beautifully with other Crosswater Belgravia products in a similar finish.

For the ultimate vintage look, you can’t go wrong with the Burlington Claremont bath shower mixer. Elegant and stylish, this is a bath tap and shower tap in one, meaning you can wash your hair while you soak and rinse the bath of bubbles once you’re done. The Claremont four spoke tap heads ensure you can easily control the temperature and flow of the water, so every experience is luxurious and stress-free.

If you have particularly high or low pressure, you can also opt for a Neoperl Aerator and Neoperl Flow Straightener to ensure you get a consistent flow of water with every use.